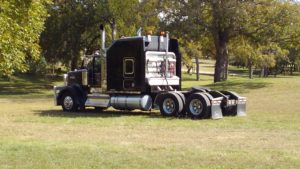 As professional drivers, in our travels all over the country, we have learned that quite literally, “you never know what is around the next bend.”  Naturally, my co-driver/wife and I want things to go smoothly at all times.  This is understandable considering the fact we are operating a forty ton rig and when things don’t go smoothly, life can become problematic very quickly.   We have also learned that we never know who we are “going to run into.”  I don’t mean that literally – while driving – rather, I am referring to those, “Divine appointments,” that our Heavenly Father has in our “lane,” so to speak – in the paths that we travel.  Recently we came to the intersection of such an occasion when things weren’t going so well, (i.e., we had a breakdown). This led to a meeting with one of those, “Divine appointments.”

We were under a load and stopped for the night at a rest area on the interstate highway just north of Austin, Texas.  While checking the equipment and the load, I discovered a problem that would need professional attention and repair.  We were down for the night until help arrived from over a hundred miles away the next morning.  Of course we wanted to get going and finish up the job at hand.  But God had other plans.  As I was walking from our truck to the building, I noticed three men walking toward me.  My spirit went into a state of heightened alertness as I became aware that like the “Magi,” those wise men who came to see the child, Jesus, during His birth, these men were on a spiritual mission.  During the Christmas holiday season, the “wise men” are usually portrayed as three in number, although no one really knows exactly.  They too were on a spiritual mission – “…To worship him,” (Matthew 2:2).  They would also present the one who was born, “King of the Jews,” with gifts which, undoubtedly, would have been important and valuable to Joseph and Mary when they later went to Egypt.  Theirs was a godly mission, being led of God himself, to follow the star, to seek and to find – “The Truth.”  They sought the God of the universe and when they found Him, “they were overjoyed,” (Matthew 2:10).  They were obedient to God’s call on their lives.  Overflowing with joy is what happens when people who love and respect God find the truth.  Jesus said, “I am the way, the truth and the life.”  When they saw the child with his mother, Mary, “they bowed down and worshiped him,” (Matt. 2:11).  They were truly “wise men.”  Like all who would follow after their example in seeking God and His truth, they “bowed” in humility and submission.  And they worshiped him.

As the three men approached I began to try to ascertain to what religious group they belonged.  I didn’t think they were evangelical Christians.  They didn’t fit the description of Mormon missionaries since there were three of them and they were wearing colored shirts with stripes and ties.  I correctly assumed they belonged to the Jehovah’s Witnesses organization.  My first thought was to avoid them but our trajectory was not right for such a decision.  We were on course for a headlong spiritual collision.  As I contemplated stepping out of their way and going around them, I felt the Lord was leading me to confront them and warn them of the dangerous, destructive and eternal consequences of teaching false doctrine in the name of God.

Each man had a satchel over his shoulder that contained religious tracts and what their organization considers to be the true version of the Bible.  As we met each other we began a conversation.  Of the three, one was older than the other two, one was middle aged and the third was a younger man.  The elder said little during our conversation.  The middle aged man did most of the talking.  He started to pull out of his satchel their “bible.”  I politely told him to put it away since I already knew what it said.  I told the men that I have read the Bible from cover to cover many times.  By my actions and words I wanted to make it clear to them that I was in control of the conversation and our meeting – not them.

At the beginning of our discussion, (that lasted for several hours), and then again at the end, I told them that God, in the Bible, issues severe warnings against preaching or teaching false doctrine, (teachings).   As professional drivers, we understand the consequences of, “going down the wrong road.”  When teaching incorrect doctrine concerning the Son of God, the Lord Jesus Christ, those consequences can last forever.   I told them I was aware they were out roaming the highways and bi-ways thinking they were “serving” God and doing Him a favor.  I opened our conversation by telling them and to which they agreed, that their faith teaches Jesus Christ is not God nor is equal to God.  So I encouraged them to read, even in their own version of the bible, the story of “doubting” Thomas.  After the resurrection of Jesus, the Lord appeared to the disciples who were gathered together in a room with the doors locked out of fear.  He said to them, “Peace be with you!”  There is peace with God and a  quietness of the soul, like still water on a calm day when one believes in Jesus.  All fear is gone!  When I think of the “Wise Men,” in my mind I picture men who were strong, powerful, confident, yet peaceful and gentle.  After showing them the scars in his hands and side, like the Magi, they were “overjoyed.”  However, one of the disciples, Thomas, was not with the others during the appearance.

“Now Thomas, one of the twelve, was not with the disciples when Jesus came.  So the other disciples told him, “We have seen the Lord!”  But he said to them, “Unless I see the nail marks in his hands and put my finger where the nails were, and put my hand into his side, I will not believe it.”  A week later his disciples were in the house again, and Thomas was with them.  Though the doors were locked, Jesus came and stood among them and said, “Peace be with  you.”  Then he said to Thomas, “Put your finger here; see my hands.  Reach out your hand and put it into my side.  Stop doubting and believe.”  Thomas said to him, “My Lord and my God!”  (John 20: 24-28).

I asked them if they agreed this story was true.  They agreed.  Their own version of the Bible is essentially worded the same as what I just quoted from the New International Version.  I then told them that if Jesus were to appear during our discussion, right then and there at the rest area, that I could do as Thomas did and bow down and worship him.  I asked them if they could do the same and follow the example of Thomas to which they emphatically replied, no!  They said they could not and would not do so.

There are many other occasions in the Bible where it is written that people who became believers in Jesus, “worshiped him.”  In the gospel of John, Chapter nine, is written an account of a man, born blind, who was healed.  This short passage of scripture is rich with spiritual truth.  Jesus was questioned by his disciples about sin.  They wanted to know why the man was born blind.  Why would God allow such a thing?  During the encounter Jesus healed the man in a manner that seems very odd to us – He spit on the ground.  This is not just ordinary spit, this is God spit!  With it, God, here on earth, made some mud and put it on the man’s eyes.  If he had been able to see, like most of us, he might have said – yuk!  Don’t do that.  That’s gross!  Most of us try to figure God out.  We try to make sense of things that to us don’t make sense.  It’s very simple really, God made mud with His spit, put it on the man’s eyes then told him to do something – “wash in the Pool of Siloam.”  The man did what God told him to do – he, “went and washed and came home seeing.”  The man didn’t argue about doing such a simple thing, he just did what he was told to do.  His need was great.  Although most people are not born physically blind, we are all born spiritually blind.  The man in this story was healed of physical blindness but was also healed of spiritual blindness by believing on the Lord Jesus Christ;

This account of the healing of the man born blind created quite a stir among the people.  Like the times in which we live, there was division.  There were questions about who the man was and of who was Jesus.    Some believed, others doubted even though the healing actually occurred.  The authorities at the time not only did not believe, even though they could not deny the truth of what happened, but took a position of opposition to Jesus, to the works and miracles of God and to the blessings of what God does in the lives of people.  They refused to humble themselves and acknowledge the truth that was before them.

Another account is told in Luke, chapter 24 of believers in the Lord who worshiped Him;

“When he had led them out to the vicinity of Bethany, he lifted up his hands and blessed them.  While he was blessing them, he left them and was taken up into heaven.  Then they worshiped him and returned to Jerusalem with great joy.  And they stayed continually at the temple, praising God.”  (Luke 24:50-53).

To worship the Lord leads to “great joy” and praise of God.  Unlike the “three” Magi wise men, the three men I encountered were not wise.  Like the religious leaders mentioned previously,  they would not bow down in humility before the Lord or seek the truth.   They foolishly thought they knew the truth.  But most importantly, in the stubbornness and rebellion of their hearts, refuse to worship him.

Although most people are not members of the “Jehovah’s Witnesses,” many people struggle with just who is Jesus.  In the gospel of John, people in a crowd who were following Jesus, wanted to know what God expected of them.  This is a good question that many people ask.  Jesus answer was simple.  The conversation went like this;  “Then they asked him, “What must we do to do the works God requires?”  Jesus answered, “The work of God is this; to believe in the one he has sent.”  (John 6″28-29).

Inspirations of the heart